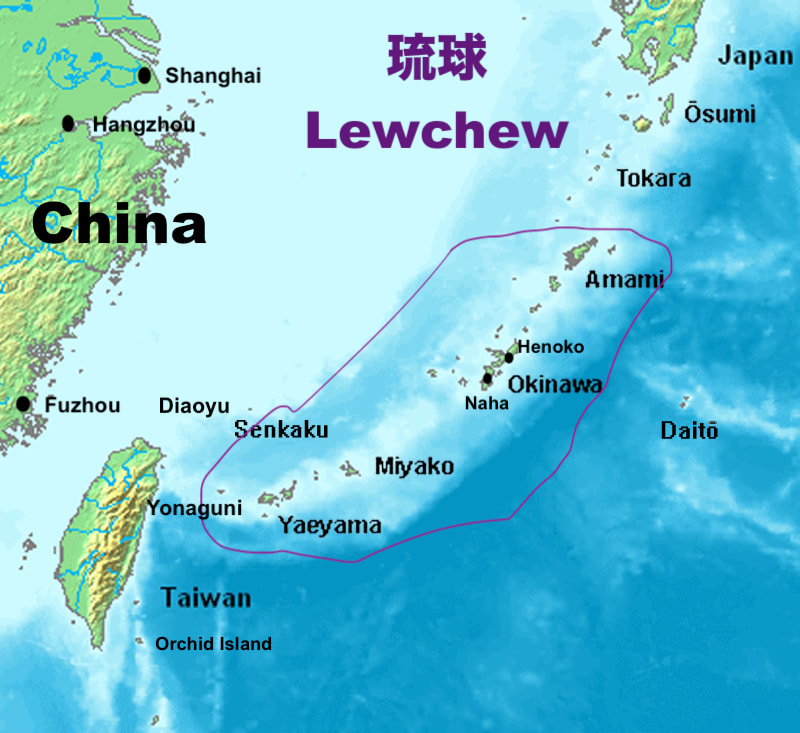 Lewchew shares a border with China. Historically the Diaoyu / Senkaku Islands were considered Chinese, even by the Japanese.
The four main archipelagoes in Loochoo are (from north to south):
​Additionally there are some islands that are outliers, and do not neatly fit into any of the four main Loochoo archipelagoes:

​What about the Diaoyu / Senkaku Islands?

For information about the Diaoyu / Senkaku Islands, please click here.

Indigenous Loochooans have inhabited the Loochoo Islands since time immemorial. Archeological evidence suggests Loochooans have inhabited the islands for over 32,000 years.
The Loochooan peoples are part of the Austronesian pacific island people group, and share many similarities with their neighbors. For instance, scholars have identified cultural similarities in indigenous architecture, hair styles, and tattooing between Loochoo, Tao (Orchid Island), and Mindanao (the southern part of the Philippines). Like most Pacific Island nations, Loochooans have long practiced tapa or the making of textiles out of plant fibers.
DNA studies suggest that Loochooans have similar traits to the Ainu (the indigenous peoples of Japan). Japanese people, who are descended from settlers who moved to Japan from Korea and China long ago, are not indigenous to Japan and are not closely related to either the Ainu or Loochooans.
Loochooans are known for our unique culture and languages, our longevity and good health, our semi-matriarchal society, our history as a major maritime trade power during the 15th - 16th centuries, our lack of interest in hoarding wealth, our yuimaru or sharing culture, our love of peace and our strong aversion to the U.S. and Japan militaries.
Since time immemorial Loochoo was a highly-respected independent nation on par with Korea. Until the late 19th century Loochoo was internationally known as one of the "Big Three of East Asia," along with China and Korea. Loochoo experienced two golden ages, first during the 14th-16th centuries, and second during the 18th-19th centuries.

Until the late-19th century, Loochoo was an idilic society, with virtually no poverty, crime, homeless, wars, violence, or domestic abuse. Loochooans had little need or interest in money. Weapons were banned in Loochoo around the 16th century. The standard of living was high, and there was little inequality.
In 1879 Japan illegally invaded and annexed Loochoo, against the will of Loochooans. Japan of course went on to do the same to many other countries, such as Korea, China, the Philippines, and most of Asia.
The invasion by Japan marked the beginning of the Loochoo diaspora, also known as the Loochoo Worldwide Community.